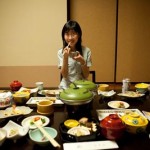 A Taste of Japan

I just came back from my first visit to Japan. To me, there is no better place to showcase the fusion of east and west, traditional values and modern sensations than Japan. Few people today are not affected in some way by the ideas, culture or economy of Japan. We visited Japan’s modern capital Tokyo, old imperial capital Kyoto, and country city Hakone. Tokyo has reinvented itself as one of the world’s most modern and energizing cities. It’s a shopping paradise with huge department stores, street markets, and fascinating one of a kind shops at Ginza and Shibuya. Unlike the economic vitality of Tokyo, Kyoto is famous for its religious sites: temples, shrines and pavilions are everywhere. Country city Hakone is equally popular for relaxation and hot spring spas as well as the fantastic views of Mount Fuji.

Before I visited Japan, I already read so much about it. However, I feel that it was during this visit I came to understand its traditions and values at a deeper level and be able to relate them to my own outlook in life and work by comparison.

1) Statue of Hachiko – Symbol of Faithfulness and Loyalty
Being loyal and faithful is very important in Japanese people’s value system. I learned that from a visit to the statue of Hachiko. It was built in memory of a faithful dog named Hachiko. In 1924, Hachikō was brought to Tokyo by Professor Ueno at the University of Tokyo. Every day, he saw the Professor out from the front door and greeted him at the end of the day at the nearby Shibuya Station. The pair continued their daily routine until one day the professor suffered a heart attack and passed away in school. Hachikō was loyal and every day he waited sitting at the train station for Professor to return. This continued for nine years with Hachico appearing precisely when the train was due at the station. Hachikō attracted the attention of other commuters. People brought treats and food to nourish him during his wait. The statue was built for people to pay respect to this faithful dog, and he became a national symbol of loyalty.

2) Japanese Cuisine – Wrapping Culture
Japan is famous for its wrapping culture. Everything is wrapped in the most artistic form. From product, food to manners, language, even human body. You can certainly read more about the purpose and power of wrapping in Japanese culture. The best showcase of this concept through my visit is Japanese cuisine. The artistic plating makes Japanese dishes so beautiful that you feel bad to even touch them. This is interesting especially when the content of the dish is simple, the preparation and cleaning afterwards can be time consuming because it takes so many dishes to make a dinner. Although some say that this is tradition because in the past the resource was scarce so Japanese have to make simple food look appealing. But I think pursuing the attractive presentation to the extreme is embedded in their blood. The product packaging is always artful, the streets are always tidy and organized, even people are always dressed nicely and fashionably. It shows that to the Japanese people, content and delivery/presentation are equally important.

3) Restaurant and Work culture
Walking on any street in Tokyo, you will be amazed by the density of restaurants. Every block, every corner, under the bridge, in the subway station, they are everywhere. We like to think this is the direct result of its work culture. We never saw these many people on the street at 10PM on a weekday evening. It’s the norm in Japan for men to work overtime everyday to at least 7PM and then have dinner together with their coworkers after work. It is also not uncommon to see men having dinner alone in the restaurants because as the prime earners in most families, men are expected to climb the corporate ladder by spending time working or socializing with their colleagues. Wives would look down on their husbands if they go home early. Work is an integral part to their identity. You can sense the pressure through the many stand-up restaurants where no seats are provided, or through the fact that most people fall asleep on the subway while the train take them home at midnight. This work culture and long commute time effectively cut their connections with the family: they leave before children get up, come back after they go to bed, and collapse on weekends with fatigue.

I love to travel to different parts of the world, to experience different cultures and life styles. My traveling experience allows me to look at things from different perspectives and to become more open-minded and adaptable in my approach. To me, there is certainly a difference between vacationing and traveling. You can go to Hawaii three times a year vacationing, but it definitely feels different when you travel to different parts of the world to see with your own eyes how people live and work. Those travel experiences have benefited me on so many levels and whenever possible, I will keep on planning my next destination. I encourage other people to set aside time and money to travel and to taste other parts of the world with your own senses.